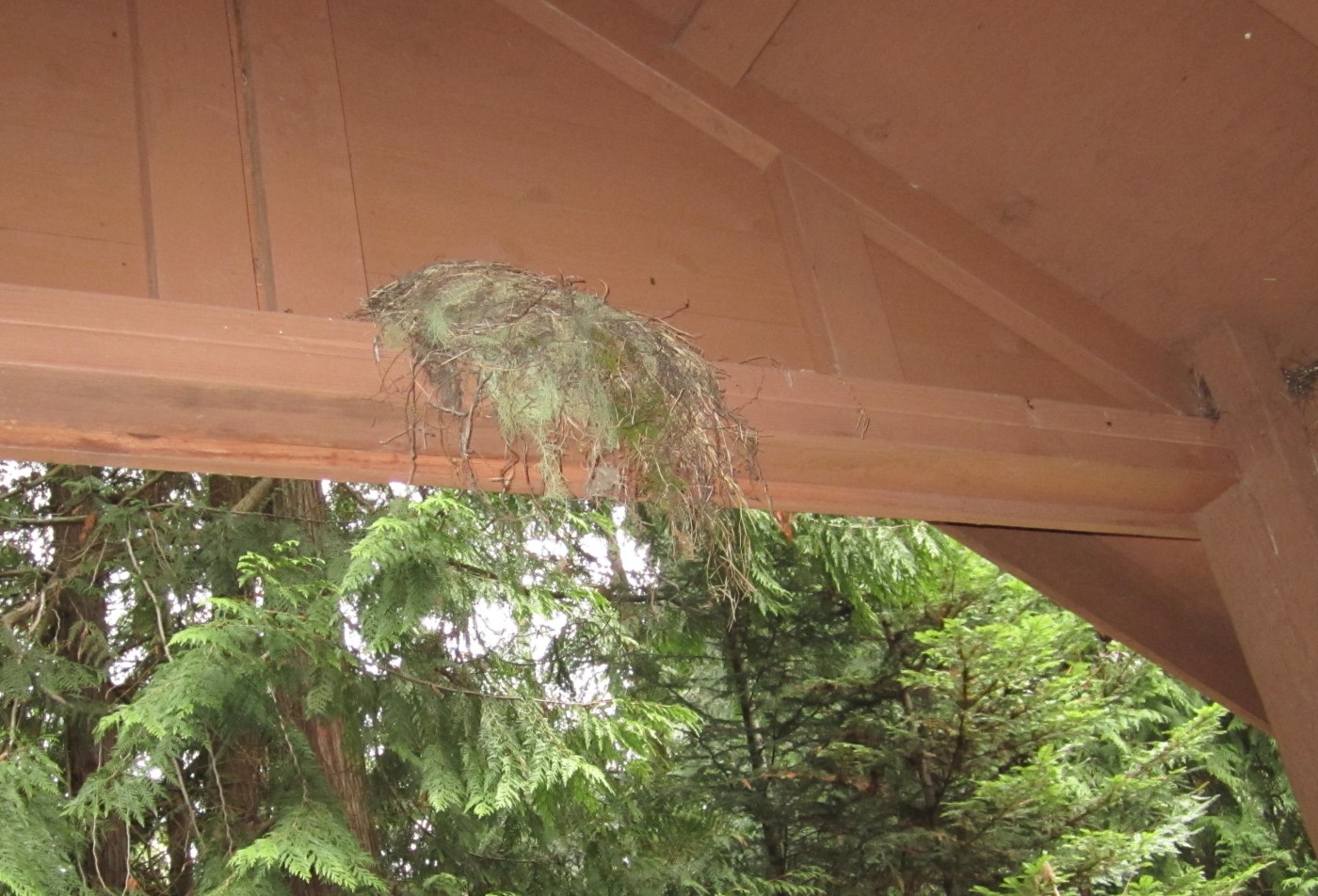 Early last spring, a pair of rufous-sided towhees started a nest under the eaves of our front porch.

The ledge they chose seemed to be too narrow for the home that the birds wanted to build. Every evening, a new pile of twigs, lichen, and other woodsy debris had fallen off their construction site and landed on the porch floor for David or me to sweep away.

We considered shooing the birds off and putting up baffles so they couldn’t come back. But we are softies when it comes to the birds that live near that house, so we let our neighbors do their thing.

And let me tell you, that was one determined couple. After a few weeks of producing enough fallen debris to make twenty nests, it became clear that something had taken hold and was coming together back there in the shadows. Then for a few weeks all was quiet, except for flutterings-away when we opened the front door or stepped onto the porch.

After which things got exciting again, with many hurried trips back and forth from dawn till after dusk. Finally, David and I caught glimpses of hungry mouths, when the chicks had grown big enough for us to glimpse from our sightlines down below.

The towhees managed to bring their chicks to maturity and launch them into the world, leaving an empty nest behind. This despite the distraction of having those annoying humans walking in and out of their domain however-many-times-a-day.

At first, the nest under our porch roof might seem like a piece of “nature” that got planted in the “human” world. But really, what’s the big difference between my house and the towhees’ nest, other than scale? The birds collected material from the world around them and used it to construct a safe dwelling for their family. That’s how our house got built, too. The big difference is that the towhees have the skills to make their own home without hiring outside help, and David and I don’t.

We human beings are a self-conscious lot, with a tendency to see ourselves as separate from the natural world. But in fact, the basic processes by which we’re conceived, born, and die are pretty much the same as for any other living creature, including Mr. and Mrs. Rufous-Sided Towhee. We’re as much a part of nature as anything else that’s made of atoms, molecules, and energy. We can’t help being that way.

Almost a year has past since the towhee couple began their messy house-building under our eaves. A new Groundhog Day has come and gone, the buds on the red-flowering currant bushes are opening, and I am looking forward to whatever new life makes a home and brings new life into my natural world this spring.

blessings on all your paths,

2 thoughts on “What Is Nature?”