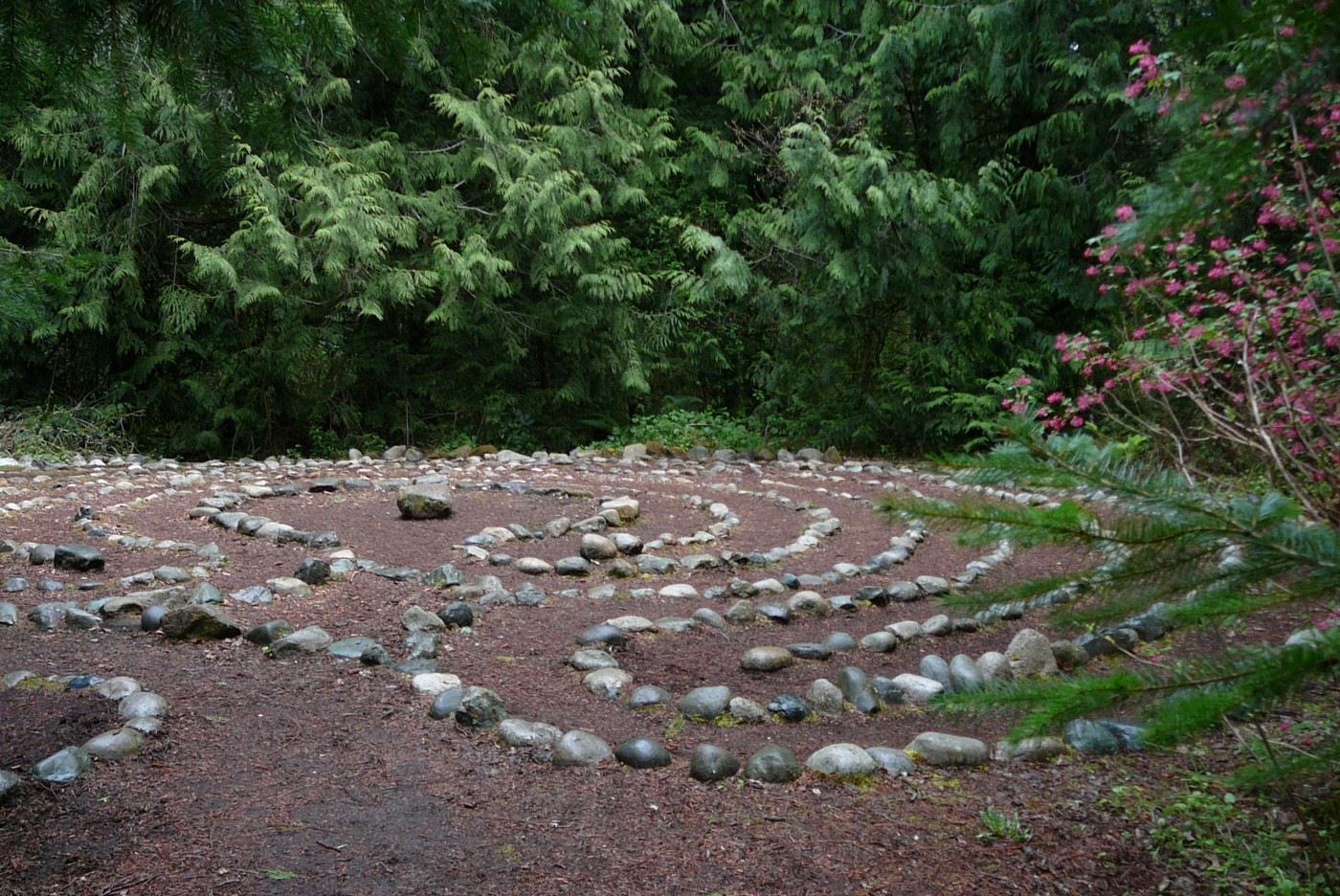 On New Year’s Eve, I took a morning drive out to H.J. Carroll Park to help repair the labyrinth.

A day or two before Christmas, news had spread among local labyrinthers that the meditative path in the park was all kerfuffled.

Someone—likely more than one person—had come into the secluded glade, pushed stones around, cut branches off encircling cedars, and spread the branches on the labyrinth floor.

The center had been transformed into a corridor that cut through the middle of the 7-circuit design. Shifted stones blocked the path on either side.

Johanna Perkins was one of the first to get the news. It was Johanna who had spearheaded the effort to make the labyrinth some years ago, working with the county parks department to find the best site and then gathering volunteers to design and construct it. On Christmas Day, she dashed out to the park with her son to assess the damage and roughly re-configure the paths. They left the labyrinth walkable, though still quite disheveled.

Then Johanna sent out email calling for a volunteer work party on the morning of New Years Eve. When the time came, I threw a rake, cloppers, and work gloves in the back seat of the car and took off for the park in Chimacum.

I was the first to arrive. To get a sense of the task ahead, I decided to walk the labyrinth.

Circling the familiar path felt like being in a slow, careful conversation with a friend who’d been in an accident and was still shaken up, her clothes torn and spattered, her sense of self in disarray. Some of the stones had been set up on edge, giving a mini-Stonehenge feel to sections of the path. Others were too small and widely spaced. I guessed those were the ones hastily laid down by Johanna and her son to fill in gaps.

I followed the path in to the center, paused to look around, then followed the path back out. As I emerged at the entrance, there were Johanna and George, a labyrinth lover from Marrowstone Island, strolling along the gravel path into the glade. We were soon joined by Ray and Nancy, regulars who walk the park labyrinth every Monday morning as part of their prayer lives. The last to arrive was Kathleen, one of the volunteers who helped build the labyrinth, and who with Ray, Nancy, Johanna, me, and a number of others, maintained it through the years.

After greetings and a general assessment, we settled into work, each making whatever repair we saw needed doing next. We searched the woods around the labyrinth for displaced stones to bring back into the circle. The morning was cool, with pure blue sky peeking between clouds and treetops.

It felt good to discover a likely stone, carry it to a place where it might fit, make a shallow nest, place and adjust so it touched its neighbors. We laid down the rocks that had been tipped on their edges, and we dug up a few that were slowly sinking in the earth. We pulled weeds and trimmed overhanging vines.

With the six of us, it didn’t take long. In about an hour, our old friend looked like herself again, all spiffed up and ready for the New Year.

While working, we speculated. Who had done this, and when, and why? It must have happened only a day or two before being discovered, which meant right around the winter solstice. So … maybe a solstice gathering with ritual? Likely enough, given the demographics out here on the peninsula.

I privately wondered if the ritual had been to counter the Mayan calendar doomsday predictions. In which case—hey presto—maybe it worked?! The thought made me smile. Johanna wondered if an individual had been looking for a particular space to do inner healing work. I remarked that it seemed to be the work of folks who had not yet fully grasped the concept of “public property.” Someone else nodded and said, “Maybe young people?” Well … maybe. Maybe not.

Each of us who came to make repairs that day had personal ties to the labyrinth, in some cases reaching back to its creation. We had built it, tended it, walked it, and prayed while walking. Moving along its path, we had moved along our inner paths, too.

When I first heard that something had happened to the labyrinth in the park, I felt unsettled, then vulnerable and protective, as if I’d learned of a child in harm’s way. Those who had come upon the changes unawares, expecting a peaceful labyrinth walk, spoke of a wide range of feelings, from puzzlement to shock to nausea.

I think we each felt a violation of sacred space.

And so, when we came to work together to heal the space, we also came to heal ourselves.

Here’s something I find interesting. Whoever went to the effort of pushing aside the big labyrinth stones, cutting the branches, and laying the cedar fronds must have done that work to create a sacred space for themselves.

To some extent, this pattern is no more than the conqueror-of-the-day replacing the conquered religion. But I don’t believe that political expediency tells the whole story. Something about repeated prayer sinks into the stones and bones of a place. After a while, a place of prayer just feels like the right place to keep on praying.

It isn’t that prayer makes a place holy. All the earth is holy—every rock, twig, and grain of soil. We know it, and we forget it, and then we fall asleep.

Here’s one way of thinking about it. Prayer opens a conduit, and maybe some aspect of the conduit has a life apart from the one who prays. When the Spirit that’s caught in matter—caught in the earth, caught in us—calls back and forth to itself again and again, then over time the conduit gets so wide and deep that echoes of prayer can be heard by anyone who passes by. Echoes that call out to the wayfarer, saying “Wake up! Wake up! You are standing on holy ground!”

Which thought makes me want to pray without ceasing wherever I go.

With best wishes to all for a whole and holy New Year,

9 thoughts on “On Holy Ground”